This page shows some of the items you will collect during your time journey. Apart from these items, there are many more like keys and passes for example you will need to get further.

Keep in mind that items dropped by defeated opponents will disappear a short time afterwards if you do not collect them.

The sword of peace is the primary weapon of Hype. It was handed over to him by Queen Lyzothe for being the champion of the kingdom. It is golden and serrated. By achieving the Jewel of the Gods, Hype's sword turns blue and starts flashing.

The crossbow is the secondary weapon of Hype. It fires both blue coloured bolts and modernised red coloured bolts that do more damage. This wepaon is useful to take out enemies from distance making it the best solution to defend yourself against bats. It can be fired from the hip or from first person view for better precision. The sidequest to destroy beehives is only accomplishable with it.

Blue bolts are the standard ammunition of the crossbow. They can be bought from the blacksmith in the town of Torras or collected by destroying barrels.

Red bolts are modernised ammunition of the crossbow. They do more damage and can be bought from the blacksmith in the town of Torras from the era of Taskan II or collected by destroying barrels.

Magic is needed when fighting against opponents coming up in squads.

Magia Glacia is an ice magic spell that can enwrap opponents with an ice brick.

There are four stages of Magia Glacia:

Focus Magicum is a fire magic spell that can light up opponents.

There are four stages of Focus Magicum:

Electricus Magicum is an electrical magic spell that can shock opponents.

Plastyks, shortened to Pk, are the currency in Hype - The Time Quest. Of course, you will need much of it to be able to buy something from the tradesman, blacksmith or other people. At the beginning, you start with a purse that is capable of keeping up to 200 plastyks.

Sometimes, fallen opponents leave a nut that instantly regenerates some of your health by just collecting it. In contrast to potions, nuts cannot be stored in your inventory for later use.

Green herbs slightly recharge your magic. Usually, they can be found in green crates or bought from the tradesman in the town of Torras.

Yellow herbs recharge your magic more than green herbs. They are offered by the tradesman in the town of Torras.

Blue potions slightly restore your health. They can be bought from the tradesman in the town of Torras.

Red potions restore your health more than blue potions do. They can be bought from the tradesman in the town of Torras.

Mauve potions restore both your health even more than red potions and your magic. They can be bought from the tradesman in the town of Torras. The first mauve potion is accessible by defeating Granslak. Only buyable in the era of Taskan IV.

Jewels are used to travel though time. They have to be charged through Energia Prismas that can be collected by flying with Zatila to the sky.

There are four jewels:

These boots increase your running speed tremendously and spray many stars while doing so. Having the running boots equipped you will neither be able to walk nor to draw your weapons anymore. You can win them by completing shoemaker Wellet's race in the era of Taskan III. 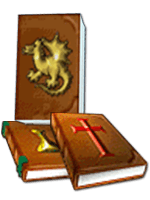 Following almanacs describe the tale of Hype. They have to be rewritten to ensure Barnak's suspense of Hype coming back to the era of Taskan IV.

Enost's Almanac is located in the black tower. It describes how Hype manages to travel through time and the arrival of black knight Barnak.

The Magician's Almanac is kept in the laboratory. It contains the happenings during the era of Taskan II as Hype frees the magicians and defeats Rajoth. There, it is also mentioned that Hype succeeds at the field of courage and forms the alliance between him and the brigands.

The almanac of the monks tells about the tensions between the monastery and King Taskan I. Hype is mentioned as thief of the Royal Jewel and the conqueror of Mhasse. 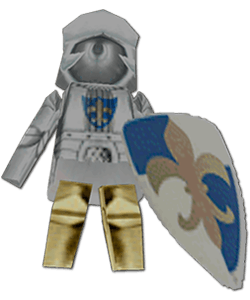 The Mystic Armour is believed to be lost until King Taskan II finds it in the lost city. The armour is kept in the treasure room of the field of courage.