Usually, bats have their habitat in the forest but they hang or fly at many different places e.g. in the underground of Torras. If you come closer to them they will wake up and try to attack you. For this reason it is advisable to keep distance and take advantage of your crossbow. Make sure you have enough bolts for it. Though, you could just run away from them in most cases.

The only time you will come across wolfs is in the forest whilst the era of Taskan I. They will chase you when coming too close. By defeating them they will drop some items for you. However, you can just run away like a coward.

Boars guzzle peacefully their blades of grass except in case you disturb them by coming too close. Then they act like wolfs. They appear in the forest by the era of Taskan I and III. 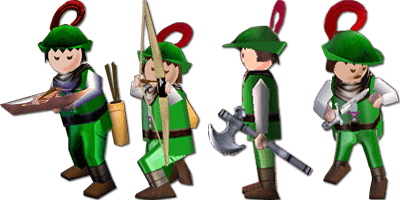 A brigand is the first human opponent you will have to face. Fortunately, you will ally with the brigands during the game. Therefore, they will not attack you anymore.

Brigands live in the forest and have their own village there. Although, you can meet some brigands outside of the forest, only there they attack you.

There are four types of brigands: 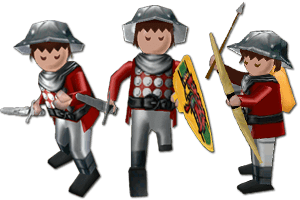 King Taskan I is guarded by his knights. They watch the entrance to the town Torras and defend the fortress.

There are three classes of Taskan I guard knights: 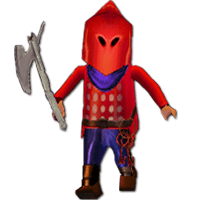 Early in the game you will be put into the dungeon of the fortress because of your unknown origin. The hangman takes your weapons and watches the cells. He also carries the keys fitting to them. 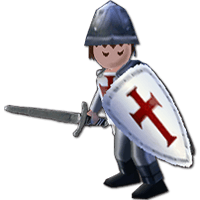 The monastery is guarded by crusaders armed with a shortssword or a bow. After Hype releasing monastery knight Talboth from prison, Hype is promised that the doors of the monastery would be opened for him. 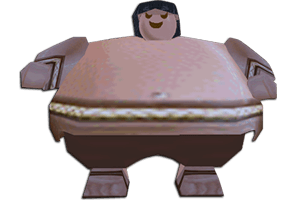 Mhasse is the second boss you have to defeat. He is very corpulent and uses his body to attack you by jumping on you. Weapons cannot injure him. That is why you need to bring him to fall from the monastery tower by hitting him with your sword. After he is finished, you will earn the Jewel of Mankind. 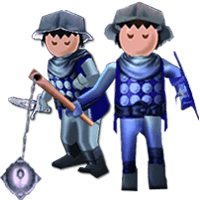 King Taskan II is guarded by his knights. They watch the entrance to the town Torras and defend the fortress.

There are two classes of Taskan II guard knights:

Before having the honor to fight Senekal you will have to face a gladiator in the field of courage in the era of Taskan II. He has the capability of throwing stones and hitting you if standing close to him. 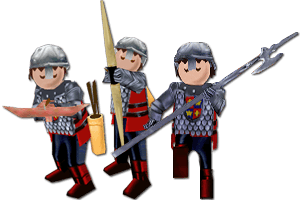 King Taskan III is guarded by his knights. Besides, they defend the fortress and the monastery.

There are three classes of Taskan III guard knights: 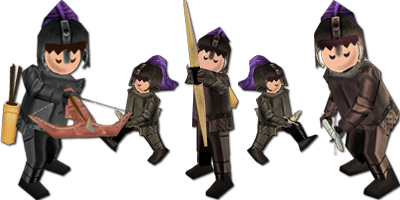 Dragon Knights are dark guards send by black knight Barnak in order to bring chaos to Torras and assaulting the brigand village. They are the most powerful knights Hype encounters.

There are four types of dragon knights: 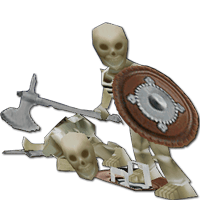 The first time you will have to mess around with undead skeletons is in the dungeon of the fortress but they will appear at many different places. As the topic "undead" says, skeletons cannot be beaten. After some hits on them they fall into many pieces of bones but are then revived in about 15 seconds.

Ghosts float in the air and are only visible if you come closer to them. They will chase and try to hit you while making some spooky noises. After hitting them with your sword while jumping or with magic spells a couple of times they disappear. 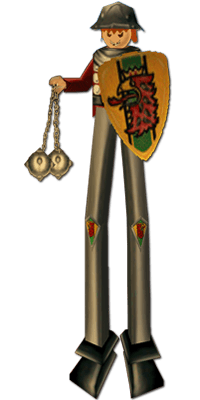 Granslak is the very first boss and guardian of the breast plate of the first dragon. He is way taller than a common PLAYMOBIL® figure. He is equipped with mace and shield. After being defeated, Granslak shrinks down and disappears under his helmet. That is why he escapes through a mousehole in the fortress' walls. If you hit the helmet before Granslak escapes, you will be rewarded with the first mauve potion of the game. 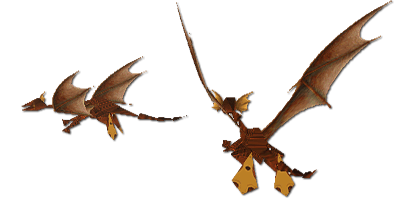 Except for Voydh, dragons are only your enemies in the sky. They try to prevent you from charging jewels while riding on dragon Zatila by colliding and spitting fire. 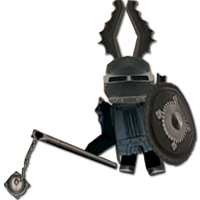 Magic armours are armed with a mace and move by hovering. Similar to undead skeletons, black magic revives the armour after being defeated. 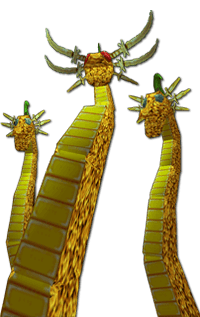 The three headed dragon is a boss that consists of gilded plastyks (plastyks = the currency of the game). One main head and two secondary heads form the dragon. Its task is it to keep raiders from stealing the field of courage's treasures. By plunging into them it can surprisingly perform a strike. 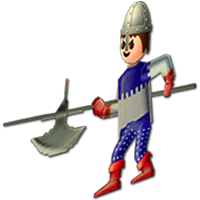 Masked as wall hangings two dimensional knights will definitely surprise you. Their attacks with the halberd are very effective as well as quick.

Evil Hype is the bad counterpart of Hype and stands in contrast to virtue which is reflected by his dark armour and the mirrored fleur-de-lis on it. He is a great challenge for Hype he has to master in order to earn the Jewel of Virtue. During the fight Evil Hype uses magic spells, the crossbow with an increased rate of fire, and his sword.

Flying skulls appear in the black tower that is used as an huge sundial for Barnak. The skulls fly diagonal through the room and can injure you when being hit.