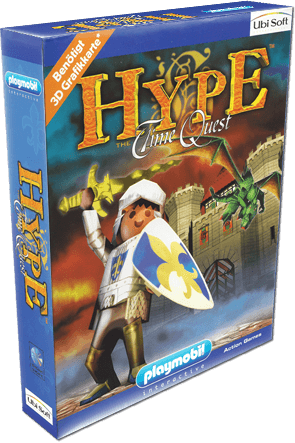 What the game is about

Hype - The Time Quest is an action adventure 3D third person game situated in the PLAYMOBIL® universe during the Middle Ages first published by Ubi Soft Entertainment in 1999. It is besides Alex Builds His Farm (1999) and Laura's Happy Adventures (1999) one of three games ever developed by PLAYMOBIL® Interactive. The original concept came from producer Alain Tascan. You will expect knights, dragons, magicians and puzzles. Hype - The Time Quest could be compared to Zelda but I do not do so. It has its very own charm. Although the game is intended to be played by children it may be too hard for them to complete it. Fortunately, Hype Tips will help you in the process.

Watch the intro to understand what the plot of Hype - The Time Quest in general is about.

Now that you have watched the intro you may want to know what comes next. In a few sentences and without spoiling too much, Hype needs to get to his king's era in order to fight the black knight Barnak. Therefore, Hype seeks for special Jewels, he has to charge so that they help him with travelling through time. The "time machine" is a sundial Hype must beat with his sword. There are four eras reigned by their own kings: King Taskan I until King Taskan IV. Every epoc has a time span of 50 years (get an overview in the gallery). In the game you will take control of protagonist Hype of course.

What to do if I want to play this game?

You will need a copy of Hype - The Time Quest in every way. Unfortunately, it is not buyable anymore. So you should try to get an used CD of Hype at online auction sites or at flea markets. Aside from that, you could help to revive the game by voting for it on GOG.

Because of its age, the game has almost no special hardware requirements in contrast to recent games. The really issue with running the game reasonably are newer operating systems and those with 64-bit architectures. If you have Windows 7 or greater and notice problems starting the game take a look at the support page.

The native resolution of the game are 640x480 pixels. Thanks to nGlide drivers it could be increased up to UHD-2 (7680×4320 pixels). Though, textures will not get sharper of course but the game does look much better. It also supports Dolby Surround decoding turning two audio channels into four.

There are some other Hype related projects going on. First, member Bearmadrid runs a blog about his work on an animation film of Hype - The Time Quest. Moreover a group of hypeforever is developing a remake of the game based on the unity game engine.